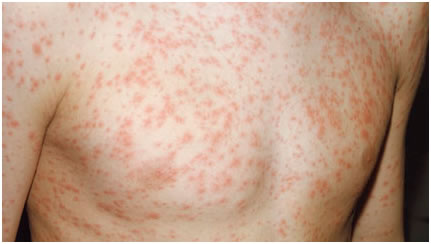 Rubella — commonly known as German measles or 3-day measles — is an infection that primarily affects the skin and lymph nodes. It is caused by the rubella virus (not the same virus that causes measles), which is usually transmitted by droplets from the nose or throat that others breathe in. It can also pass through a pregnant woman's bloodstream to infect her unborn child.

It's a generally mild disease in children; the primary medical danger of rubella is the infection of pregnant women because it can cause congenital rubella syndrome in developing babies.

Before a vaccine against rubella became available in 1969, rubella epidemics occurred every 6-9 years, most often among kids 5 to 9 years old. Many cases of congenital rubella occurred as well. Thanks to immunization, there are far fewer cases of rubella and congenital rubella.

Most rubella infections today appear in young, non-immunized adults rather than in kids. In fact, experts estimate that 10% of young adults are currently susceptible to rubella, which could pose a danger to children they might have someday.

Rubella infection may begin with 1-2 days of mild fever (99-100°F, 37.2-37.8°C) and swollen, tender lymph nodes, usually in the back of the neck or behind the ears. A rash then begins on the face and spreads downward. As it spreads, it usually clears on the face. This rash is often the first sign of illness that a parent notices.

The rubella rash can look like many other viral rashes. It appears as either pink or light red spots, which may merge to form evenly colored patches. The rash can itch and lasts up to 3 days. As the rash clears, the affected skin occasionally sheds in very fine flakes.

Other symptoms of rubella (these are more common in teens and adults) can include headache, loss of appetite, mild conjunctivitis (inflammation of the lining of the eyelids and eyeballs), a stuffy or runny nose, swollen lymph nodes in other parts of the body, and pain and swelling in the joints (especially in young women). Many people with rubella have few or no symptoms.

Rubella in a pregnant woman can cause congenital rubella syndrome, with potentially devastating consequences for the developing fetus. Children who are infected with rubella before birth are at risk for growth retardation; mental retardation; malformations of the heart and eyes; deafness; and liver, spleen, and bone marrow problems.

The rubella virus passes from person to person through tiny drops of fluid from the nose and throat. People who have rubella are most contagious from 1 week before to 1 week after the rash appears. Someone who is infected but has no symptoms can still spread the virus.

Infants who have congenital rubella syndrome can shed the virus in urine and fluid from the nose and throat for a year or more and may pass the virus to people who have not been immunized.

Rubella can be prevented by the rubella vaccine. Widespread immunization against rubella is critical to controlling the spread of the disease, thereby preventing birth defects caused by congenital rubella syndrome.

The vaccine is usually given to children at 12-15 months of age as part of the scheduled measles-mumps-rubella (MMR) immunization. A second dose of MMR is generally given at 4-6 years of age. As is the case with all immunization schedules, there are important exceptions and special circumstances. For example, if your child will be traveling outside the United States, the vaccine can be given as early as 6 months of age. Talk to your child’s doctor to see when the vaccine is needed

The rubella vaccine should not be given to pregnant women or to a woman who may become pregnant within 1 month of receiving the vaccine. If you are thinking about becoming pregnant, make sure that you're immune to rubella through a blood test or proof of immunization. If you're not immune, you should receive the vaccine at least 1 month before you become pregnant.

Pregnant women who are not immune should avoid anyone who has the illness and should be vaccinated after delivery so that they will be immune during any future pregnancies.

The rubella rash usually lasts 3 days. Lymph nodes may remain swollen for a week or more, and joint pain can last for more than 2 weeks. Children who have rubella usually recover within 1 week, but adults may take longer.

Rubella cannot be treated with antibiotics because they do not work against viral infections. Unless there are complications, rubella will resolve on its own.

Any pregnant woman who has been exposed to rubella should contact her obstetrician immediately.

Rubella is typically mild in kids, who often can be cared for at home. Monitor your child's temperature and call the doctor if the fever climbs too high.

To relieve minor discomfort, you can give your child acetaminophen or ibuprofen. Do not give aspirin to a child with a viral illness because such use has been associated with the development of Reye syndrome, which can lead to liver failure and death.

When to Call the Doctor

Call the doctor if your child develops a fever of 102°F (38.9°C) or above (in a child younger than 6 months, call for a fever above 100.4°F, or 38°C), or if your child appears to be getting sicker than the mild course of symptoms described above